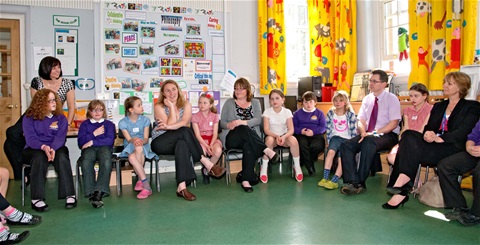 Jane has 25 years of practical experience of P4C with children, students and adults. She is a registered SAPERE trainer and Associate Trainer for Dialogue Works. She has led P4C training for over 2000 primary and secondary teachers from over 300 schools across the UK, and also internationally in the Middle East, South Asia, Caribbean, Malawi, Mexico and Spain. These include: whole school training, comissioned courses and open courses for state, private and international schools; NGOs and universities.

Until 2017, Jane was a Senior Teacher and curriculum leader for English, P4C and RE at a primary school in the North of England. Here, she facilitated a weekly P4C session for every class from Reception to Year 6. In 2015 the school was the first school in the North of England to achieve the SAPERE Gold P4C School Award. From 2017, Jane was able to bring her expertise and experience to support and train seven primary schools for three years with the SAPERE Going for Gold P4C programme. This included two schools as part of the Scottish Attainment Challege, two schools as part of the EEF P4C research and three schools as part of the Peter Sowerby Rural Small Schools Project. Jane also worked with three secondary schools on the P4C part of the Voice 21 - North of the Tyne Oracy Project. Please see the training section for schools Jane has worked with.

Currently, Jane is supporting and training three Cumbrian schools on the SAPERE Going for Gold P4C programme as part of the WELL (Western Excellence in Learning and Leadership) Project.  She is also involved in training and supporting schools on SAPERE P4C Projects: including the Templeton World RE and Science Thinking Together Project and the Welsh Government Hate Crime in Schools Project.

In 2014, Jane was accredited as a  Lead Practitioner for Global Learning and led her primary school as an Expert Centre for the national Global Learning Programme. She has a particular expertise in developing critical global thinking.

Jane is an Associate Trainer for Cumbria Development Education Centre and involved on the Education Team for Anti-Racist Cumbria.  She is also the Chair of her local SACRE(Standing Agreed Council for Religious Education) in Cumbria and is currently leading on the 'Virtual Voices in RE' project funded by Culham St Gabriel's Trust.  This is a new collaborative project between Cumbria SACRE and Cumbria DEC.  Jane also teaches part time KS3 RE at large secondary school  in North Cumbria.

In recent years, Jane is increasingly being comissioned to develop and write educational resources. Please see the P4C section and the resources section to see examples of my work.

A blog interview with me by Joana Rita from Portugal

A blog interview with me by Kushal Sohal

A filmed interview for CAPSTE by Brendan Mitchell

Jane has a BEd(Hons) with a specialism in Outdoor and Adventurous Activities from Charlotte Mason College in the Lake District.  In 2000, she achieved an MSc in Environmental and Development Education from South Bank University.  She has a strong interest in the outdoors and the environment.  In a previous life, Jane was an Education Officer for the Environment Agency.  She is married to fellow adventurer and mountaineer Simon Yates.

Fab work, excellent resources, all in one place :) thank you

And google Sara Stanley. She wrote some great articles for EYFS magazines which you get online. Sara's website is in my resources section.

Hi, I was just wondering if you have any starter games or ideas for EYFS please.
Thank you x